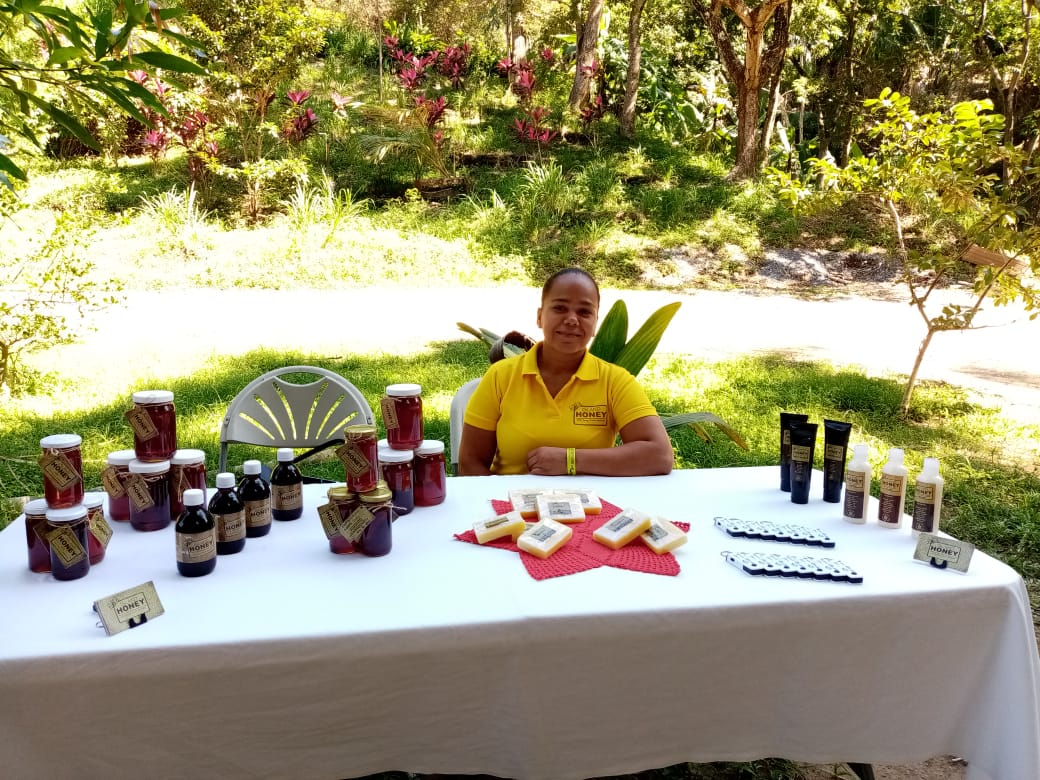 Juana Flores, the vice-president of Corozal Beekeepers Association (APICOR, for its initials in Spanish), in Roatan, Honduras, displays the honey-based products manufactured in the association. Photo: APICOR

Mrs. Juana Carolina Flores Lobo is a neighbor from the village of Corozal, on the island of Roatan, Honduras. When she heard the proposal of learning how to work with bees for the production of honey and obtaining additional income for her family, she didn’t hesitate and signed up for it.

Since that day in 2014, Juanita –as she is fondly called by those who know her– does not regret it. “Apiculture is great. It not only provides an economic livelihood to those of us who practice it, but it also gives life to the planet,” she claims truly convinced.

How did the apiculture enterprise begin?

In 2013, members of the Roatan Marine Park (RMP), with the support from the Mesoamerican Reef Fund (MAR Fund), through the Project Conservation of Marine Resources in Central America, Phase I, presented the apiculture project to Corozal fishermen as an economic alternative. Corozal is a village where most of its people (70%) depend on catching fish, lobster, and conch, while the rest (30%) make a living from farming.

According to Juanita, fishermen were very excited and happy about this opportunity. They thought that they would be making money fast and on a weekly basis. However, every enterprise requires patience, time, and dedication. So, when they realized that results were not as profitable as they expected, they got discouraged, and the project didn’t prosper.

They had four beehives and feasibility and market studies showing the viability of undertaking the initiative and following up the activities that began in 2013. So, the whole process was strengthened in 2014 by hiring a technician who would train those who wanted to take part in the apiculture project, as well as by purchasing the necessary equipment and installing more beehives.

In March 2014, when the RMP team invited the community again in order to promote the apiculture project –always with the support from the MAR Fund–, Juanita signed up along with other families.

Between 2014 and 2017, the women who worked in the apiculture project harvested honey several times and began selling it to friends and acquaintances. Also, workshops and training activities were organized on business management and honey production. In addition, support was provided to purchase equipment and raw material and to build the honey processing plant to produce bee products. And the Corozal Beekeepers Association or APICOR was formed.

Later, continuing with the successful project, APICOR –through the RMP– participated in MAR Fund’s tenth request for proposals of the Small Grants Program and won.

The proposed project, titled Apicultural alternative for the conservation and sustainable development of my community, was awarded with funding, which allowed APICOR to improve the facilities of the honey processing plant, purchase equipment to diversify their production, and manufacture shampoos, soaps, and moisturizing lotions. They also added a warehouse within the working area to store the raw material and acquired new hives. Additionally, they purchased seven protective beekeeping suits, and the business was formally incorporated. 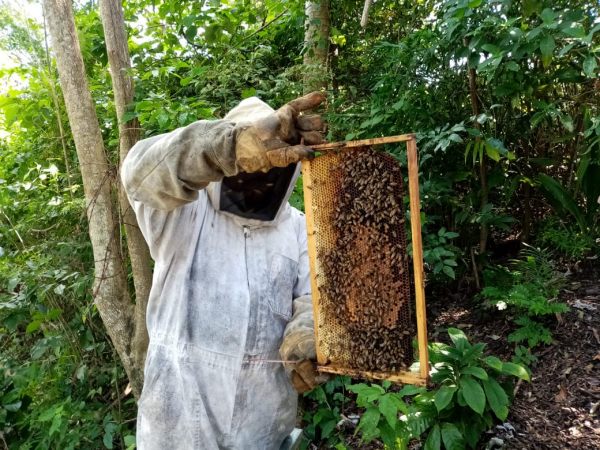 Isidro Flores, the president of APICOR, shows one of the hives from his apiary. Photo: APICOR

Juanita says that during these years, she has learned a lot about bees. She has passed on this knowledge to her three children, yet only the youngest –a 9-year old boy– has shown interest on the subject, saying that he wants to work on beekeeping when he grows up.

She explains that she feels “powerful” when she works with the techniques to coexist with these pollinating insects and obtaining the honey with which they manufacture different products, such as honey, balsamic honey, honey with honeycomb, soap, shampoo, and lotion. They sell these products together with those who have remained in the project and formed APICOR 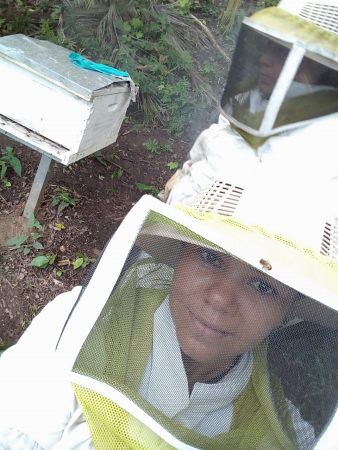 Today, APICOR is comprised of six women and four men. Juanita is the vice-president, and Isidro Flores, a fisherman, is the president. “He always helps us and encourages us to carry on. Also, we are a group of people who get along well, we work as a team, and have learned to stick together,” Juanita says.

According to Juanita, “If it hadn’t been for MAR Fund’s support, we wouldn’t have been able to buy the equipment to make our products, and we would still be looking for something to live off.”

“MAR Fund said, ‘take the enterprise forward,’ and that’s what we have been doing so far,” Juanita adds.

APICOR members greatly expect to make the business and the staff grow.

The land where the APICOR’s plant is currently installed was donated by don Isidro. However, this place has become too small because business is growing, so members of the association are seeking funds to buy new land and build another storehouse. In addition, they are setting the foundation to organize tours for domestic and international tourists who would like to visit the farm where the apiaries are kept.

Moreover, they expect to begin producing honey-based sunscreen lotion and conditioner in 2020.

As Juanita says, they have been very successful in selling products under the Island Honey brand. They are always stocked with products because community craft fairs may come up unexpectedly, and the APICOR has been invited to trade in these events. Products have been sold in the RMP store since the beginning.

Once a month, they set up a sales booth in Roatan Island Brewing Co., a  business that brews craft beer, located three kilometers from where they live. The company does not charge them for the floor space and gives them a discount for what they eat and drink. 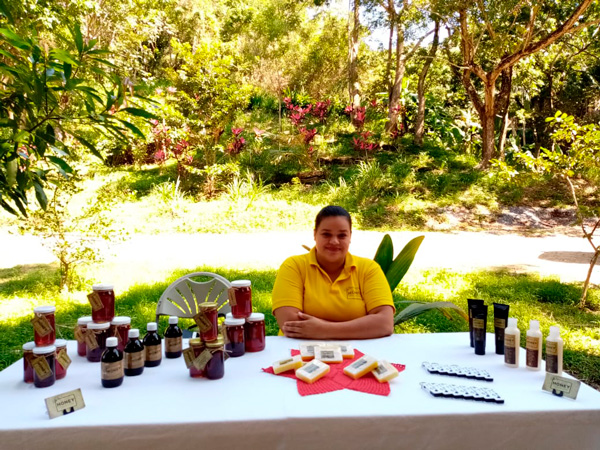 Students who visit the plant and/or apiary do not have to pay an entrance fee. They are only asked to buy the offered products. 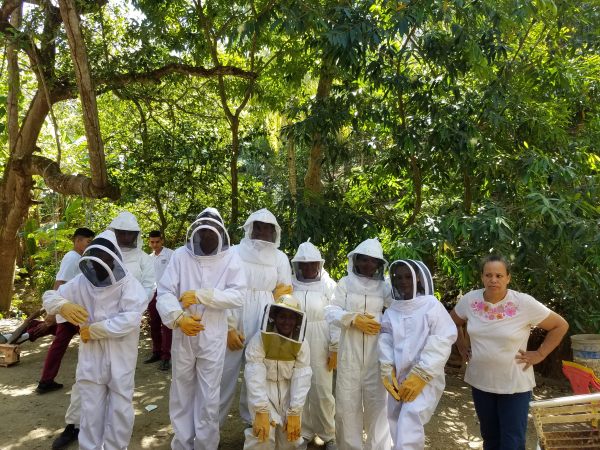 Young community students visiting the apiary and the plant of APICOR to learn about the importance of protecting bees. Photo: APICOR 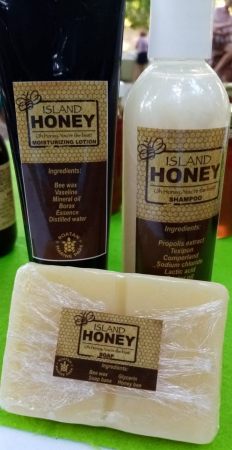 In terms of when is the best time to sell, Juanita says it’s from October through December, when rains come to the village, and more people suffer from colds and coughs. During these months, traditional and balsamic honey are in high demand. It is a success,” she says with a smile.

Rescuing beehives is another source of income for APICOR. The neighbors who have beehives in their houses call to have them removed. Juanita says that it is not easy, as it takes up to six hours to complete the task. However, they gladly do it, and depending on the case, they may charge up to 150 US dollars. 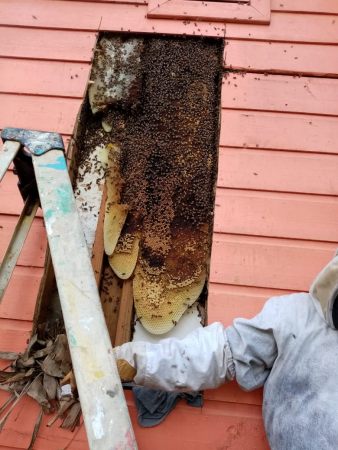 Besides the economic income that apiculture represents for Juanita and her colleagues from APICOR, this activity has contributed to higher fruit production in the village and on Roatan island.

Juanita says that the blooming of fruit trees and wild plants in her community has increased, and this helps to avoid feeding the bees with artificial formula during the winter months. As a result, the honey they produce has a multi-flower flavor and a unique amber color, aspects often commented and praised by customers. 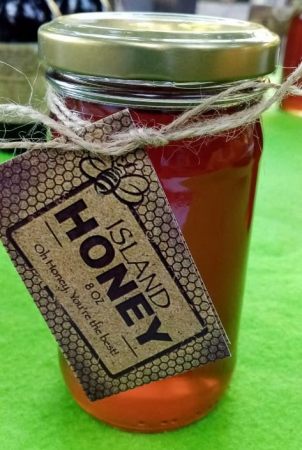 The honey from APICOR is highly valued among domestic and international tourists. Photo: APICOR

To conclude, Juanita extends a warm invitation to visit the APICOR plant and apiary while you are visiting Corozal, and buy some of the products. Because they will not only make your day sweeter, but you will also be contributing to the livelihoods of families in the community.

For information on how to obtain APICOR products, you can contact Yuri Rivera, Community Development Coordinator of the Roatan Marine Park. Phone: +504-9430-3196. E-mail: yuri.rivera@roatanmarinepark.org

RISE UP a blue call to action