Mangrove and seagrass ecosystems of Utile are valuable for the health of the Mesoamerican Reef.

In a warm environment –with the prevailing typical tropical warm weather of the Utila island, plus the warmth of comradery, affection and friendship between the public and the organizers of the event prevailed– the Project Conservation of Marine Resources in Central America, Phase II, came to a close.

The activity took place in the Headquarters of the Bay Islands Conservation Association (BICA-Utila), a non-governmental, non-profit organization that the Mesoamerican Reef Fund (MAR Fund) supported over five consecutive years to develop different programs in favor of the Mesoamerican Reef (MAR).

The Project was the effort empowered by MAR Fund in the Honduran Caribbean with the support of the Biosphere Foundation and the financial backing of the German Cooperation through KfW.

During the closing event, Claudio González, MAR Fund’s Technical Director, provided the background to the Project and stated that the region has 28 protected areas which are prioritized by government agencies, non-governmental organizations, academia and research centers that participate in MAR. Of these, five were selected when the project started: one for Mexico, two for Belize, one for Guatemala and one for Honduras, the latter, the Turtle Harbor – Rock Harbor Special Marine Protection Zone, located in Utile. The problems that compromise the integrity and safety of the reef were addressed in this area, in addition to enhancing the capabilities of coastal communities to opt for new sources of income. 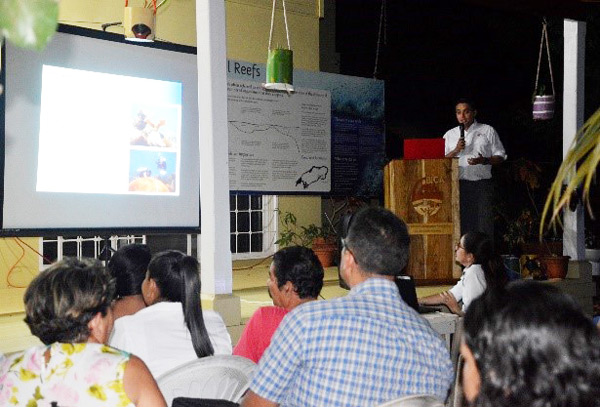 Amidst smiles of happiness and nervousness, biologist Edoardo Antúnez, director of BICA-Utila emphasized that the organization, established in 1990, is close to celebrating its 30th anniversary. During this time, it has been present in the three Bay Islands (Utile, Roatán and Guanaja) and has been crucial to carry out different conservation projects. 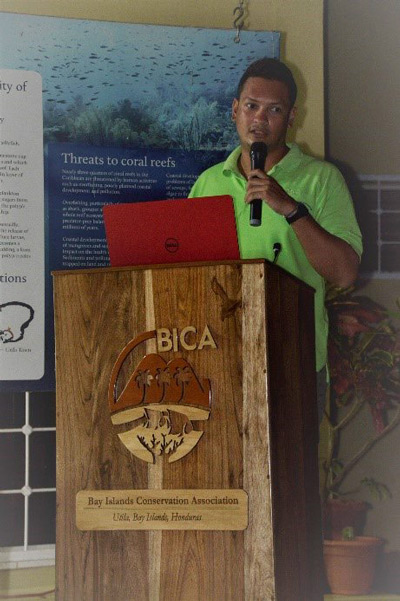 Antúnez highlighted, in relation with the accomplishments of Phase II of the Project, monitoring, protection and conservation of hawksbill (Eretmochelys imbricata) and loggerhead (Caretta caretta), turtles, with the assistance of Mr. Glen Pederson who, together with his two dog pets patrols Pumpkin Hill and notifies BICA-Utila when a nest is spotted.

In the beginning, Antúnez recounted, the program was able to spot and care for 10 to 12 nests per year. However, thanks to the Utile community and the efforts made by MAR Fund and other organizations, in 2017 the number grew to 71, and was 66 in 2018, which means that the monitoring and patrolling efforts are producing results. 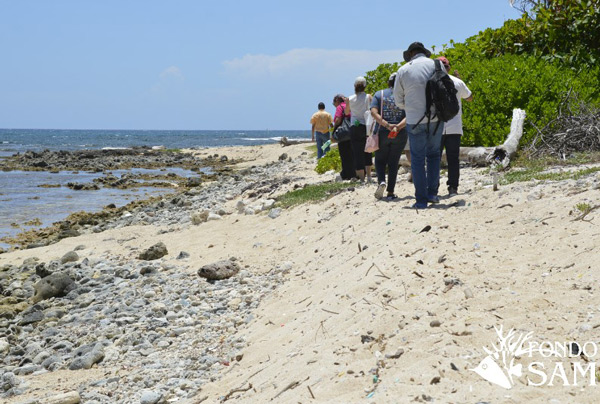 Representatives of MAR Fund and BICA-Utila partner organizations waked along the Pumpkin Hill beach in Utile.

Phase II of the Project, that started in 2015, made it possible, Antúnez said, to purchase the equipment to carry out activities in the various programs that they lead. For example, the Healthy Reefs for Healthy People (HRI) Initiative was supported with two complete monitoring efforts of 11 reef sites in 2016, and 12 in 2018. The information produced by this work is used to generate that health report on the reef in the MAR. Participation included also four connectivity exercises in the Mesoamerican Reef (ECOME in Spanish), which take place at least once per month to become acquainted with the distribution and abundance of the post-larvae of reef fish species that are present in the MAR.

With the support of Coral Reef Alliance (CORAL) and MAR Fund, more than 40 monthly monitoring efforts have been conducted of the quality of water in the island, and critical bacteria presence spots have been identified. Water analyses are done in BICA-Roatán and results will be presented to relevant authorities to demand action on the matter.

Awareness on the importance of the catchment and consumption of the lionfish led to six fishing competitions (derbys) together with local organizations like the Center for Ocean Research and the Whale Shark, Kanahau, plus the Bay Islands Foundation. These activities have produced more information about this fish. A database was created and the best way to share this information to make it useful for other organizations is under analysis.

Resulting from the derbys, 13 cooking competitions were organized with the restaurants of the island. During these activities, the BICA-Utila visitor center fills with people eager to taste the lionfish. When they do, they confirm that it is a more sustainable food option and is not poisonous, said Antúnez.

There are two special marine protection zones in Utile, Recently, two fish replenishment (not fishing) areas were declared through a municipal agreement. With the support of the Roatán Marine Park, these areas have been marked with buoys.

Both in the special protection zones as in the two fishing replenishment zones of the island, BICA-Utila does monitoring and control and surveillance patrolling. For this, it has the support of Josué Puerto, park ranger of the organization. “What we need now is to place warning signals to prevent vessels from anchoring in the reef”, added Antúnez. 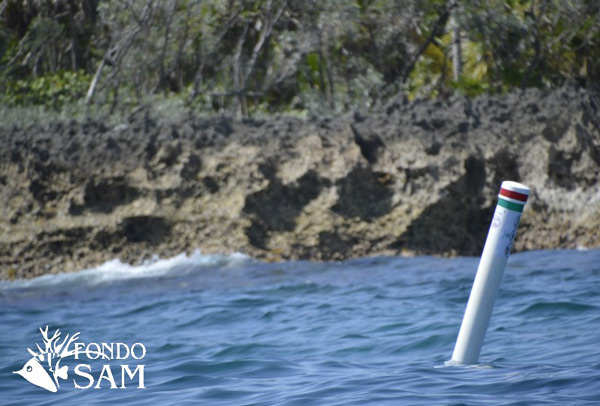 Fourteen buoys have been placed in Utile. 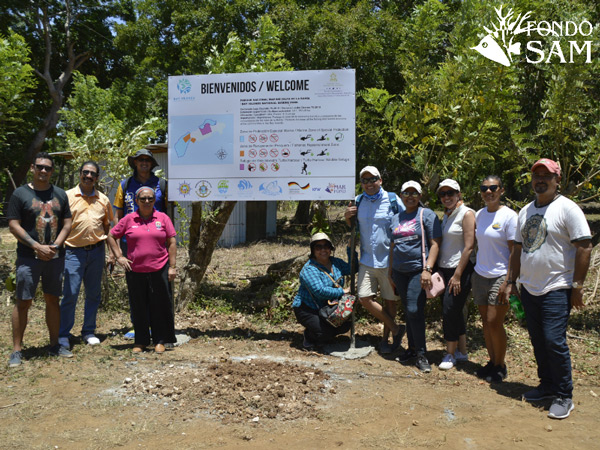 Information signs about the protected sea and land zones in Utile, that were placed in different places in the island. These sites were visited the morning prior to the Phase II closing events.

Another one of the programs that BICA-Utila is very proud of is glass recycling. Once per week, they visit 14 companies that donate glass bottles to them. They wash them, organize and cut them and make them into drinking glasses, ash trays or plant pots that they sell in the island. Another part of the collected glass is crushed and added to cement mix used to make sidewalks and roads. 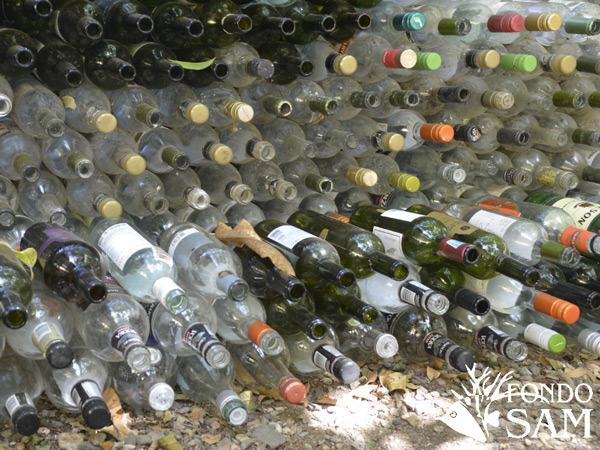 Glass bottles that will be turned into new goods.

The success of environmental education and reef leaders

Suriel Dueñas, coordinator of environmental education programs and reef leaders, recounted, with great happiness, that the first one exists since the establishment of the BICA-Utila, while the second one is more recent.

With the funding received from the Project Conservation of Marine Resources in Central America, Phase II, they were able to train around 690 persons each month, from kindergarten children to young adults from Universidad Pedagógica Nacional.

In addition, the programs empower teachers to continue with environmental education in schools and they hope to include this course in the national Honduran school curriculum. 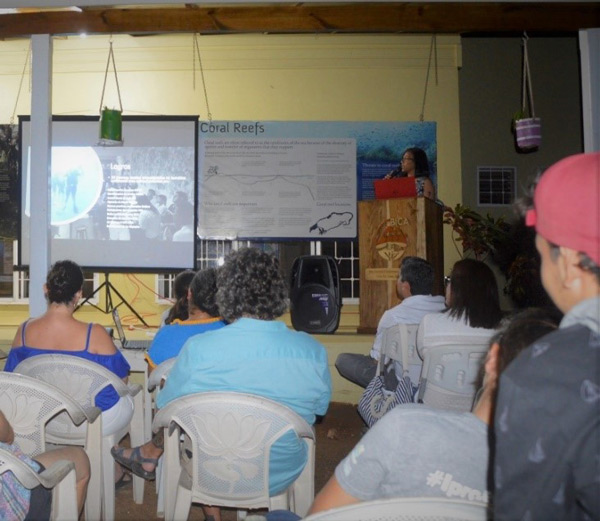 The Aula Azul (Blue Classroom) was created with the goal of having an environmental education center in place, with the equipment and space needed to carry out activities that focus on teaching conservation. It is located in the Visitors’ Center of the organization, is open to the general public and has been well received by members of the community that visit to do research, homework or receive advisory services. The members of the group of craftswomen who have been trained to be entrepreneurs meet here. 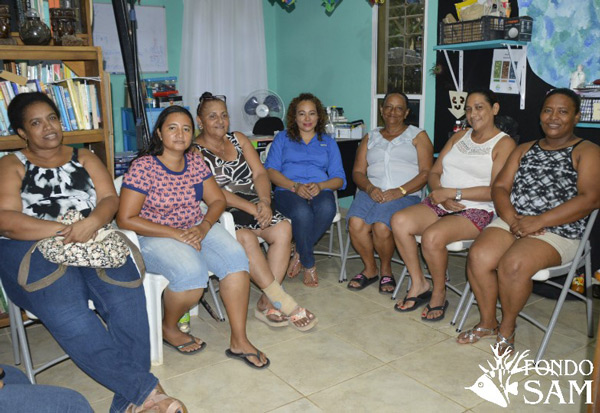 Another local Group that is the pride of BICA-Utila are the reef leaders a Group of Young persons –22 started and there as 12 active members now- who have been empowered on environmental topics and have participated in coral and fish identification workshops; in marine turtle monitoring, in coastal zone cleaning; have received diving courses and have participated in many more activities where they learn a bit of everything, said Suriel with great satisfaction. 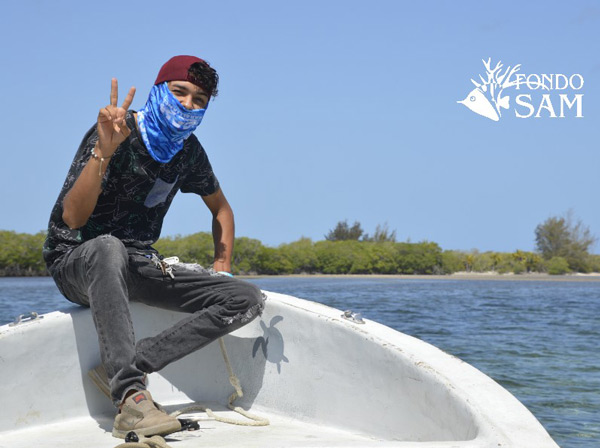 Maber, one of the proactive reef leaders from Utile.

At the end of the presentation of the most important accomplishments of BICA-Utila, Edoardo Antúnez presented a plaque of appreciation to Claudio González and to Ana Beatriz Rivas, Technical Director and MAR Fund Project officer, respectively. 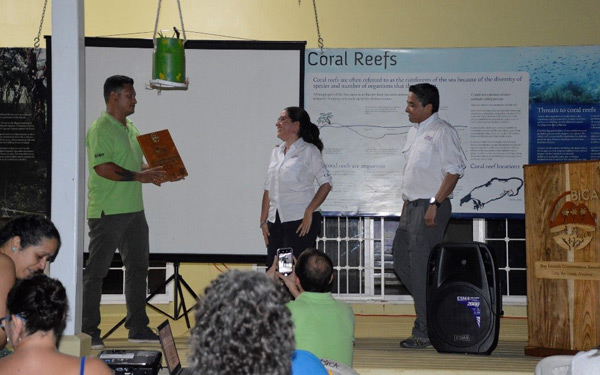 Ana Paz and Germán Ávila, from the Biosphere Foundation, also received a recognition plaque for their support.

From left to right: Germán Ávila and Ana Paz, both from the Biosphere Foundation, receive the distinction from Edoardo Antúnez, Executive Director of BICA-Utila.

To close with a special touch, the participants visited the exhibit room of the Center and then enjoyed refreshing cocktails. 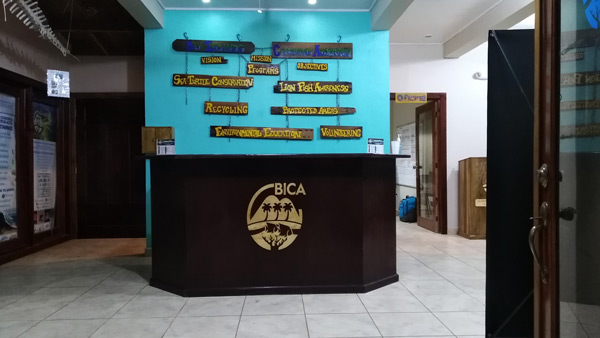 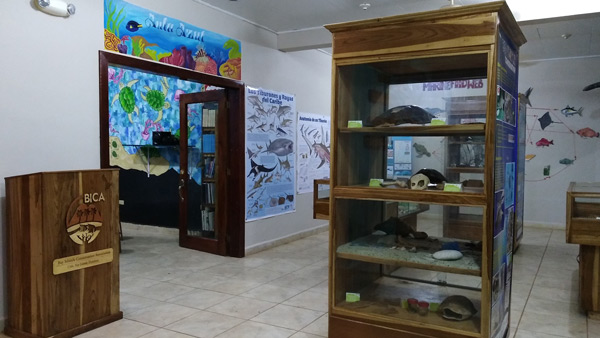 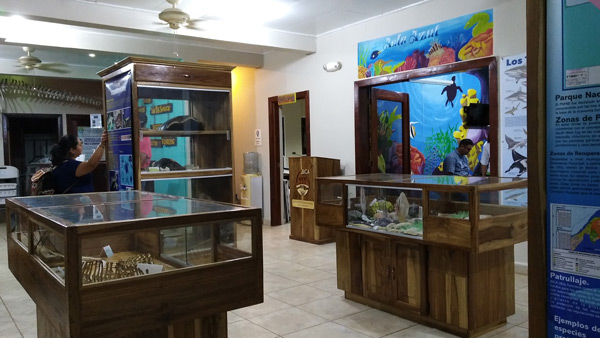 A different angle of the BICA-Utila exhibit area. 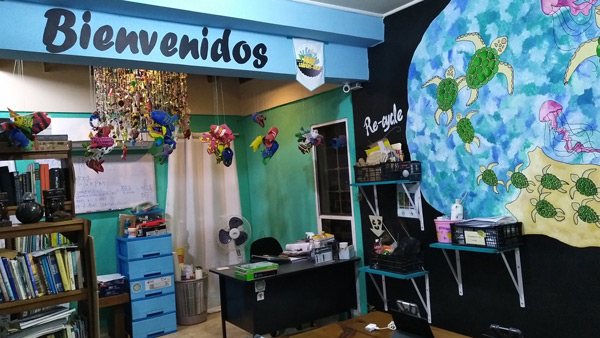 The Blue Classroom of BICA-Utila was decorated by Center workers. 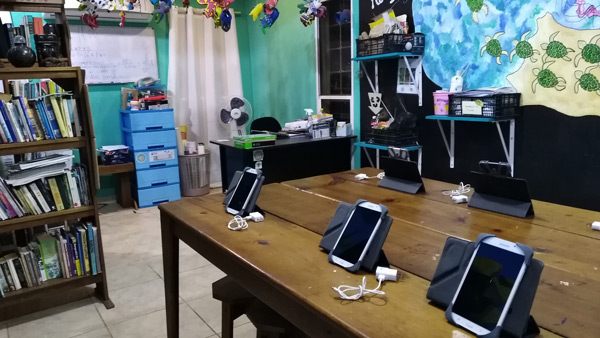 The Blue Classroom is equipped for students to come do research and school homework. 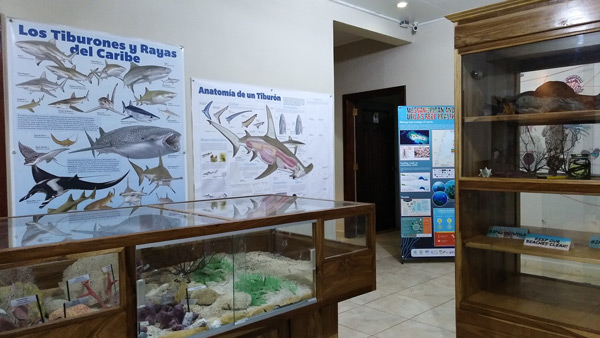 The exhibit area of the Center provides information of the animal species that live in the island. 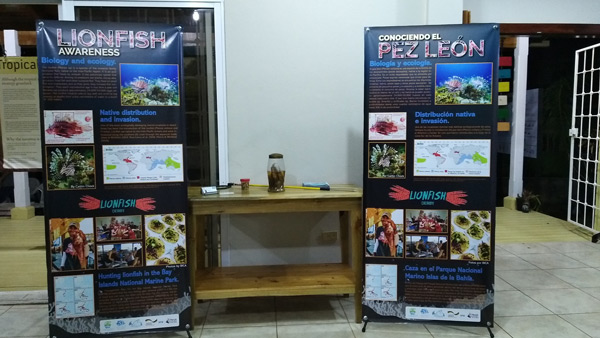 Each area in the Exhibit room has information about the activities conducted by BICA-Utila.