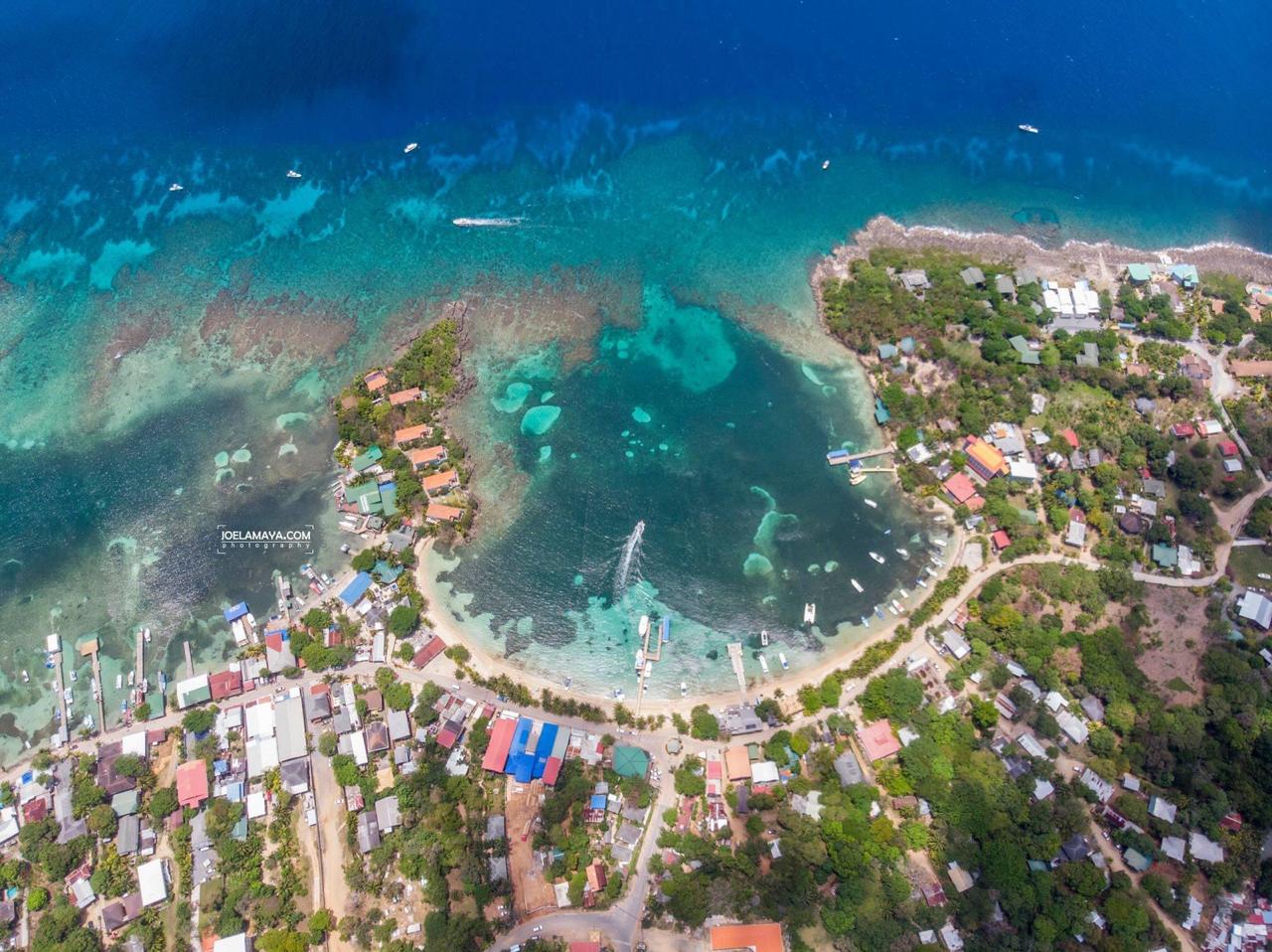 The Half Moon Bay Beach in the community of West End, in Roatán, Honduras, was awarded the Ecologic Blue Flag that certifies it as a beach with safe water for tourists. Photo credit: Joel Amaya

The water we get in our homes does not come out magically from the faucet. Bringing the liquid into the homes requires an entirely natural process (water cycle), engineering (infrastructure), and the work by a number of people.

Therefore, to value and use the water reasonably, it is essential to understand where it comes from and where it ends up after using it.

Wastewater treatment is also necessary because, otherwise, it becomes one of the causes that deteriorates human health, coral reefs, and related marine ecosystems.

In 2017, the association’s Board of Directors of the Drinking Water and Sanitation Services submitted the project “Taking care of my reef and my water system” to the Tenth Request for Proposals of the Small Grants Program of the Mesoamerican Reef Fund (MAR Fund). The project was approved and received funding to be developed.

With the granted funds, they were able to ensure the financial resources needed to take on the distribution systems of drinking water and sanitation in the West End community. The goal was to preserve natural resources and reduce pollutants reaching water bodies, especially in the Caribbean Sea. The project was implemented in 2018, and the goal was achieved, although it was not an easy process. 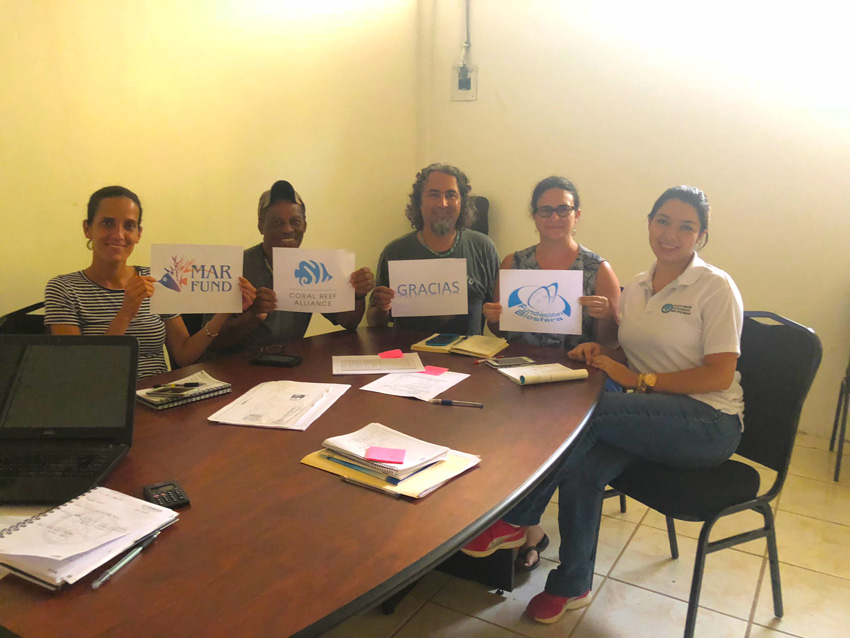 Ian Drysdale is an environmental engineer with a master’s degree in sustainable development, who has lived in West End for 20 years. He is recognized in his community for his leadership in putting initiatives forward for the common benefit. He is also one of the founders of Polo’s Water Association and has been the secretary of the association’s Water Board for the past 15 years. Ian is the Honduras coordinator of the Healthy Reefs for Healthy People Initiative (HRI) and a member of the first group from the MAR Leadership Program.

Ian said that the main goal for undertaking the association was to be in charge of the community’s drinking water system because in 2005, the performance of the existing Water Board was deficient, and many residents complained. The supply was irregular and limited, and payments were collected on a door-to-door basis.

However, since some residents were against Polo’s Water taking charge of the task, a peaceful agreement was reached in the community to establish two water supply systems, one run by Polo’s and the other by the existing Water Board.

“We began making many improvements in the area assigned to us. We installed meters, made repairs, and cleaned septic tanks. We approached the decentralized government entity that supports the Water Boards at a national level. They gave us their support in creating a payment fee for water supply, divided into six categories within two segments: residential and commercial. Each segment has three different rates: low, middle, and high consumption. This new fee was also created based on the financial needs of Polo’s Water Board to be able to continue covering the operation costs, because the electricity required to run the wells and the treatment plant is high. Besides, we need funds for improvements, to address emergencies, and to make regular repairs. This is not a privately owned business, it belongs to the community, and we need to make it sustainable,” Ian said.

From left to right: Kevin Mejía of ACME Sanitation next to Mayra Johnson, Emiliano Ramos, and Sussy Ochoa of the Polo´s Water Association.

“One of the key factors of successfully implementing a project is learning how to communicate and be patient, very patient. You should talk to people, explain to them what is going on and what the impacts are, and keep them informed,” Sussy Ochoa said, a civil engineer who was in charge of setting the project in motion, connecting the wastewater system in the West End community.

However, Sussy still remembers that when socializing the sewage system, a homeowner who did not agree to be part of the system, threw her and the BICA-Roatan staff out of his property.

“It was a very traumatic experience. Nothing like this had ever happened to me before, I felt terrible,” Sussy said. “I tried to return the following year to the same house and convince the owner to agree on the connection, but he didn’t allow it. It was not until the third year –when a municipal ordinance was already issued, mandating people to get connected to the system– that this man reluctantly agreed. When the necessary piping work began in his property, he even offered refreshments to the workers, showing how satisfied he was after realizing the positive impact that the project would bring,” Sussy said.

Another important factor for people to accept projects is to manage funds with transparency and try to optimize them, the engineer said.

“In our case, instead of engaging a company to clean the septic tanks, which were contaminating the underground water, we chose to buy a small truck, adapt a storage tank, extraction and drain pumps, and hired a couple of people to do the job. The gain was that at the end of the project, the association kept the truck and now it is used to transport supplies or equipment needed in the office, to build more connections, and to clean septic tanks, as well as carry out jobs in the community,” Sussy explains. 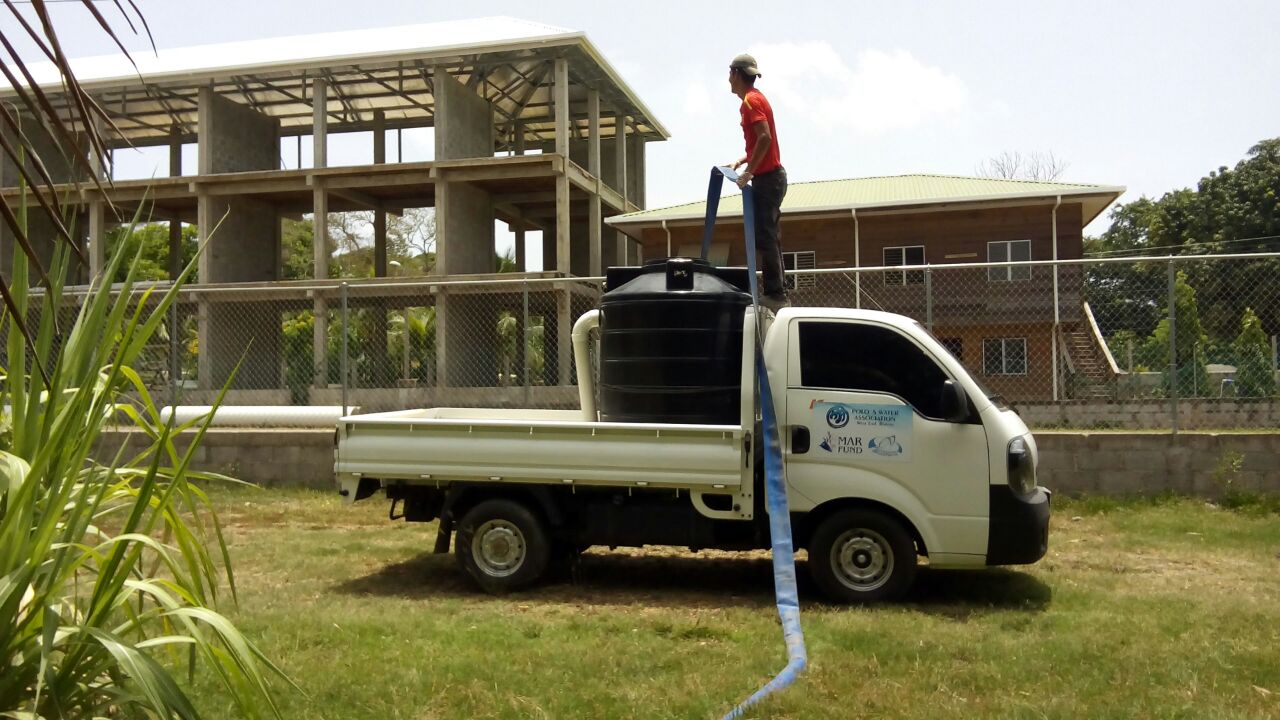 Truck purchased with funds granted by MAR Fund, which is used for different maintenance activities required in the water systems in West End. Photograph by Polo’s Water Association 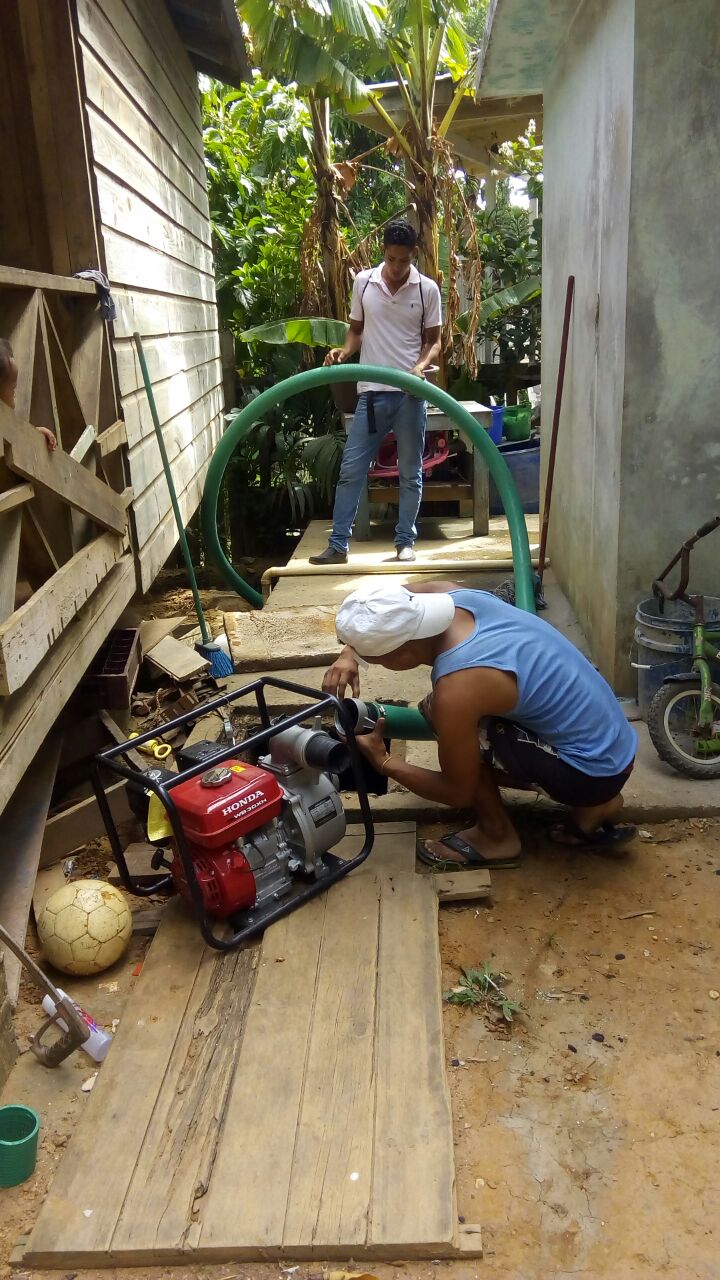 It is important to keep the people informed and have support from other local organizations to get the community involved. “We held community meetings and sent written notifications or e-mails about the work that were doing, and also about how a new payment fee would be applied for drinking water supply and wastewater treatment. We also had the support from the local council,” Sussy adds

The impacts of a proper administration

By having water meters installed and a fair fee, residents started using the water responsibly. Since the water was not being wasted, they didn’t have to pay for excess consumption. Thanks to this, during their first year of administration, Polo’s Water saw a 25 percent reduction of the water pumped into the community, Ian said.

“We are on an island where, in addition to the tourism potential, the greatest asset we have is drinking water, and we should take care of it,” the professional said.

According to Ian, the island has four wells that supply the entire population. In the West End area, Polo’s treat the water with chlorine and meet the minimum standards of Water Boards across the country. Water samples are also sent to be analyzed in a laboratory in Roatan, which certifies its quality. 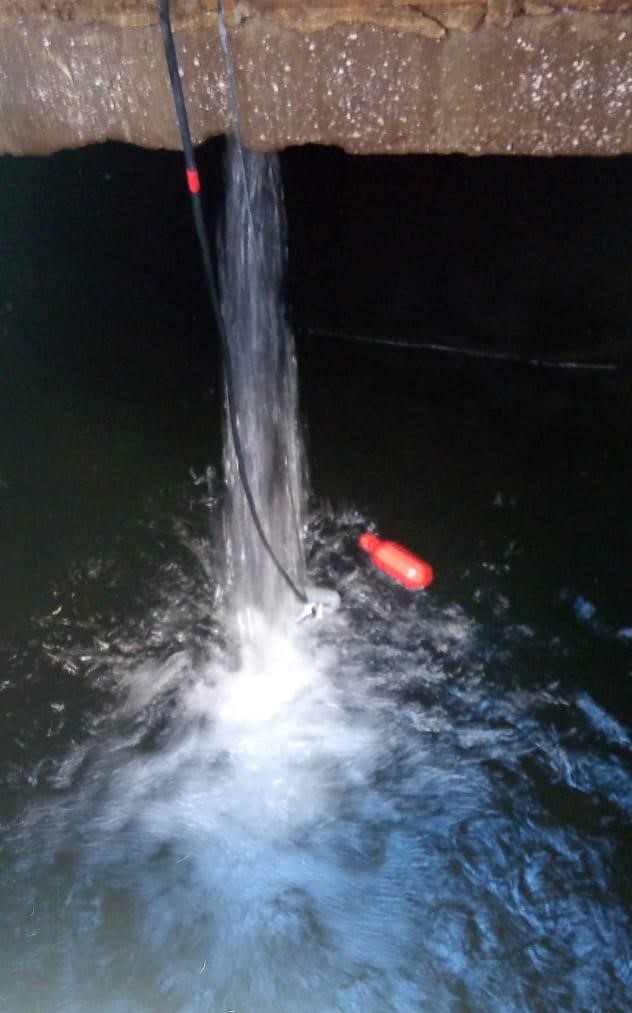 Water inlet from a well to a storage cistern. Photography by Polo’s Water Association

The wastewater treatment plant is inspected by an independent organization that conducts water quality analysis in the plant’s influence zone. After the water has been treated, it flows down into the bay of Mangrove Bight. 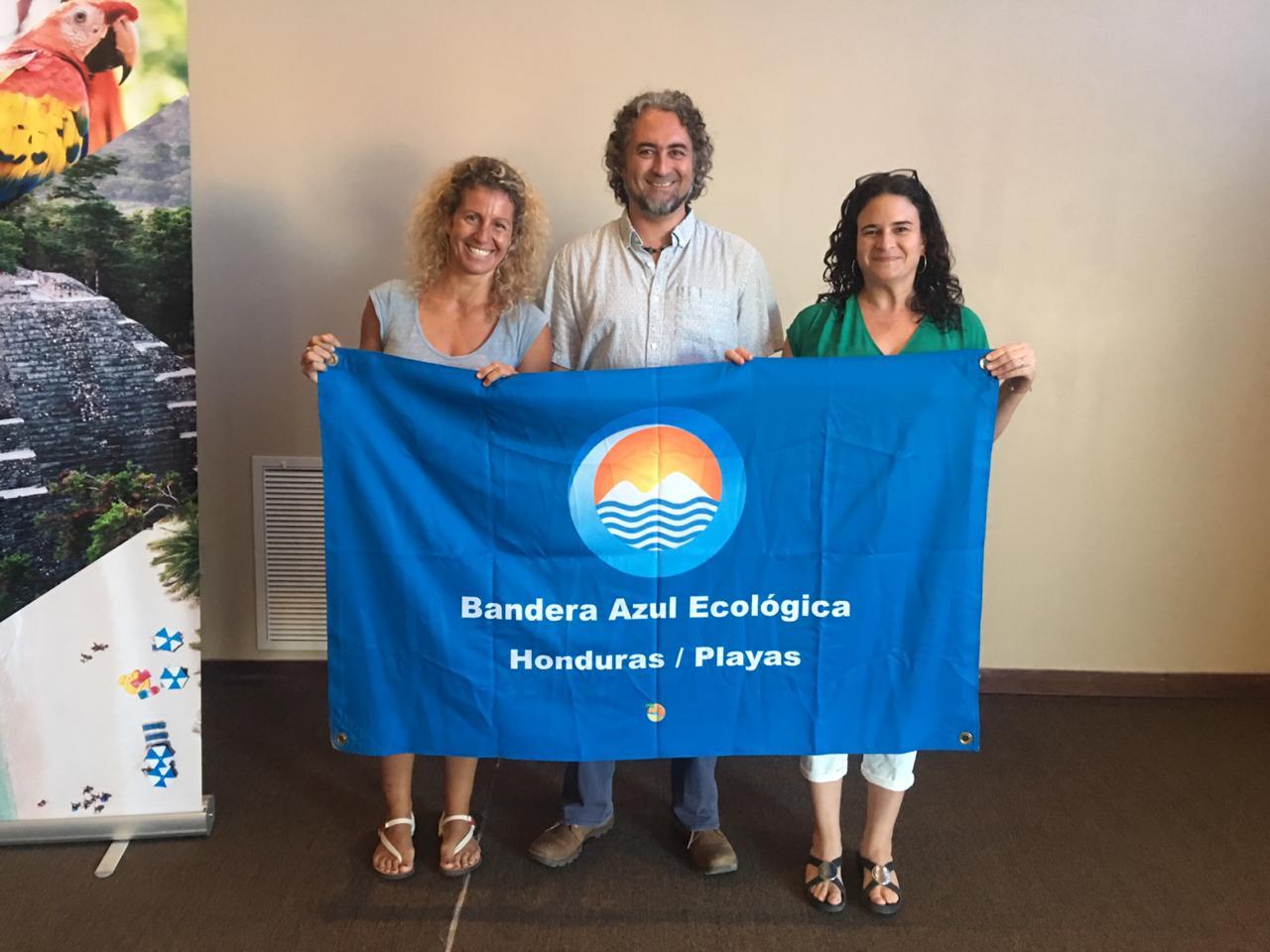 Mirta Marozzi, a former member of the West End Council, next to Ian Drysdale and Jenny Myton of the Polo’s Water Association

Certification of the Ecological Blue Flag for Half Moon Beach. Photograph by Polo’s Water Association

Sussy comments that, thanks to the support provided by MAR Fund, the key impacts achieved in this project include the number of homes connected to the main sewage system, cleaning and/or drying out septic tanks in the community, and a new payment fee was approved which ensures the funding of the association.

Also, 750 copies of the learning guide The water system of my community were prepared and printed in English and Spanish. The guide includes information about the water cycle, the importance of sanitation, a sewage system, how a water board is formed, among other topics related to the care of this vital fluid.

From left to right: Nikita Johnson of BICA-Roatán next to Nidia Ramos, David Barahona, and Rully Sigüenza, leaders of West End. Photograph by Polo’s Water Association

These guides were distributed in schools and the Municipality of Roatan. Talks were also given in West End schools, and some of the students were taken to see the water wells and treatment plant. 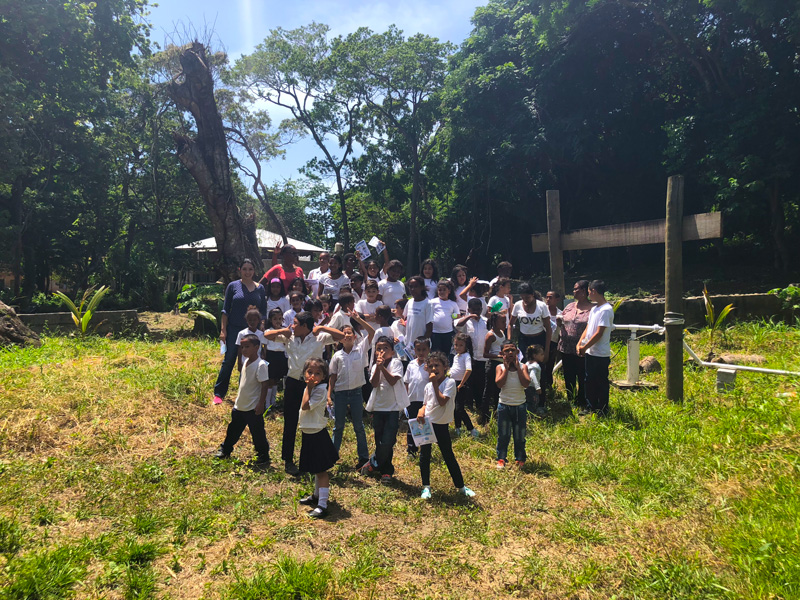 Students of Miguel Paz Barahona elementary school visited the wells of drinking water in West End to learn about the water cycle and the importance of reasonable use. Photograph by Polo’s Water Association

A dream to fulfill

According to Ian, the lack of drinking water will reach a global scale, a problem in the near future, which is why one of the goals of the Polo’s Water Association is to be able to build a surface reservoir.

However, land prices are high in Roatan, and the plot they want costs approximately US$500,000. Therefore, they have been coming up with creative ideas to raise money to buy it.

Meanwhile, they continue to teach the population of West End on how to take care of their water system. When doing so, coral reefs of the zone also benefit. As a result of treating wastewater that eventually reaches the Caribbean Sea, there has been a drop in coral diseases and less bleaching, according to the data from Coral Reef Alliance and HRI.