The Cordelia Banks Wildlife Site is described as “a paradise under the sea” by those who have had the opportunity to dive there. Photo: Claudio Contreras / International League of Conservation Photographers.

Popularly known as staghorn corals, due to the similarity of their structure with that of the antler of the mammal in question, the Acropora cervicornis corals are one of the most important corals in the region of the Mesoamerican Reef System (MAR) because they are reef builders.

Thanks to their strong substrate and their peculiar shape, A. cervicornis offer shelter to juvenile fish and protect coastal communities against strong waves.

However, there are relatively few places in the Caribbean that still hold large extensions of this coral species. One of these is the Cordelia Banks Wildlife Site, located on the southwest of Roatan Island, Honduras, where the number of A. cervicornis individuals is impressive, says marine biologist Steve Canty, coordinator of the Smithsonian Institution’s Marine Conservation Program.

“The number of these corals in that bank is surprising, especially after the massive die-off—due to an unknown agent—that in the 1980s reduced their presence in the Caribbean. Approximately 90 percent of them were lost. In addition, this population managed to recover from a bleaching event that affected the corals of Roatán about four years ago and continues to survive, despite being located very close to cruise ship docks and the amount of pollutants it receives from nearby populations,” adds Canty.

And it is precisely these signs of vitality and resilience of the A. cervicornis of Cordelia Banks that make it a site of interest not only for tourism but also for science, as a source of propagules (coral larvae) with the potential to repopulate reef communities in the MAR region.

For this reason, the organization The Coral Reef Alliance (CORAL) sponsored the study of the genetic diversity of the corals of the Cordelia Banks, that is, the total number of different genetic characteristics among them. Such differences are a basic component of biodiversity, and the greater the genetic diversity, the more likely a species is to survive environmental changes.

To carry out this research, CORAL contacted Steven Canty, who together with fellow scientists Graeme Fox, Jennifer K. Rowntree, and Richard F. Preziosi, produced the study entitled: Genetic Structure of a Remnant Acropora cervicornis Population. It was published in February 2021 by the journal Scientific Reports (the article is open access).

The summary of the document states that: “Amongst the global decline of coral reefs, hope spots such as Cordelia Banks in Honduras have been identified. This site contains dense, remnant thickets of the endangered species Acropora cervicornis, which local managers and conservation organizations view as a potential source population for coral restoration projects.”

According to Canty, CORAL, in addition to being interested in the knowledge of this important coral bank for the MAR region, wanted to have solid scientific evidence to update their management plan.

However, how do you manage corals if their biology is unknown? For this reason, he and his colleagues conducted the previously mentioned study.

Cordelia Banks is a protected area formed by four coral banks where A. cervicornis, sharks and a spawning site for snappers and groupers are present. Samples for the study were taken in 2014 from three of those banks: Big Cay; Cordelia Shoal and Smith Bank.

Biologist Mayra Núñez Vallecillo was one of the researchers who participated in the collection of samples. Mayra describes Cordelia Banks as a paradise under the sea, and indicates that having participated in this field work helped her expand her knowledge of coral reefs. According to the biologist, research of this type is important to generate adequate management and conservation tools for the protection of marine ecosystems, on which not only plants and animals, but also people depend upon for their survival. 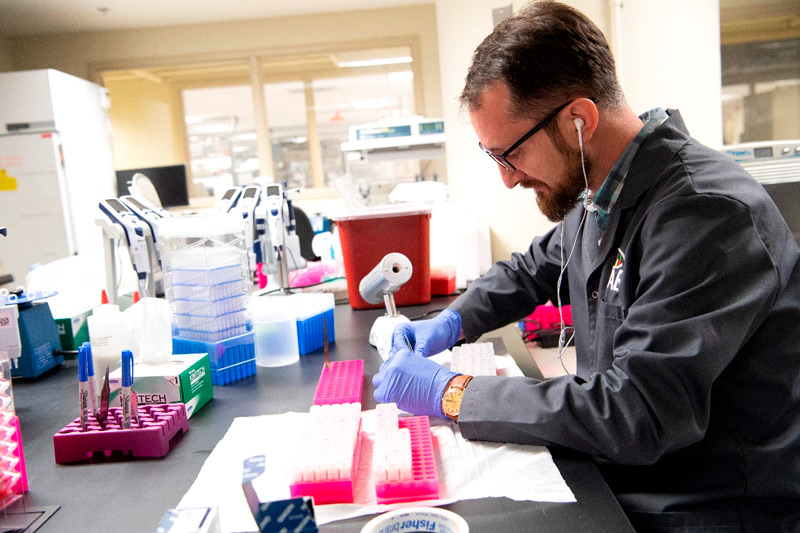 Canty indicates that an important survival mechanism of A. cervicornis is fragmentation and the fragmented pieces are carried by the currents, therefore, they can settle in places near or far from the specimen from which they were detached. This situation makes it difficult to determine whether a new coral comes from the same individual, a clone (asexual reproduction), or is the product of the union of two different ones (sexual reproduction).

If the specimens come from the same individual, their use to restore degraded coral areas would not be the best option, because since the fragments have the same genetic material, they would all be susceptible to the same diseases or disorders caused by stressful situations, Canty explains.

In Cordelia Banks, where the large numbers of colonies of this species cover about 63,440 square meters, “it was possible to identify a low genetic diversity in the three banks of the protected area and the genetic similarity of the colonies ranged from 91.3 to 95.8 percent between the banks. ‘Clonality’ rates were approximately 30 percent across all three banks. And each genotype identified was unique to each bank,” the study notes.

“Subtle differences were demonstrated within and among the banks, that is, not all of them come from the same individual. The presence of multiple genotypes suggests A. cervicornis colonies from these banks could be used to maintain and enhance genetic diversity in restoration projects.”

For this reason, the study indicates that “management of hope spots, such as Cordelia Banks, and the incorporation of genetic information into restoration projects to ensure genetic diversity within out-planted populations, will be critical in the ongoing challenge of conserving and preserving coral reefs.”

Importance of the results

Canty explains that he is happy with these findings from the study, because there is more genetic diversity in the A. cervicornis of Cordelia Banks than they thought, and it motivates him to conduct a similar study with mangroves and seagrasses because it is important to know the existing connectivity between small populations in these ecosystems and in the entire MAR region. The data obtained, as well as those produced by the aforementioned research, are used to develop management plans based on scientific evidence. Furthermore, they contribute to identifying the potential for adaptation of ecosystems, so that coastal communities know how to lead this management. For a conservation strategy to be successful, it is necessary to involve the people living in the area, says the biologist.

Canty’s recommendation, for those who lead coral restoration projects with fragments of the Cordelia Banks corals, is that they keep a genetic diary, so that they know which fragment and from which colony they used to transplant in a certain site.

Jenny Myton, an environmental engineer and CORAL’s Regional Program Director in the MAR, explains that the efforts of her work are focused on actions that will help the Mesoamerican Reef thrive. For example, it is imperative that the inflow and negative impact of wastewater on Cordelia Banks be reduced, as the quality of the surrounding water must be optimal in order for it to remain healthy.

The conservation work at Cordelia Banks, which according to data from the Healthy Reefs for Healthy People Initiative has 72.23 percent live coral (the average in the MAR is 19 percent), also aims to honor its declaration by the Honduran government as a Site of Importance for Wildlife. This declaration, achieved in 2012, took seven years of work from various governmental and non-governmental organizations, among them CORAL.

For that reason, the data produced by the study by Canty and colleagues will be useful for teaming up with the other organizations involved to update the site’s Management Plan and to determine and guide the actions to be implemented, concludes Jenny.