The COVID-19 pandemic persists all over the world. Grantees are working to their best capacity following country restrictions and adapting activities to maintain social distancing measures. MAR Fund has had constant communication with grantees and donors to continue moving forward on the conservation of the Mesoamerican Reef System.

FISHING FOR THE FUTURE

SUSTAINABLE FISHERIES FOR A THRIVING REEF

The MAR Fish project is the largest coordinated monitoring network of fish spawning aggregation (FSA) sites in the Mesoamerican Reef (MAR) region. The overall objective is to promote the recovery of fisheries by strengthening the protection of the FSAs as critical areas in the life cycle of the species, through a better knowledge and understanding of the aggregations in the region.

During the first quarter of 2021, expeditions to Cayman Crown continued and the Guatemalan Congress is reviewing the documents presented to include Cayman Crown as a core area of the Punta de Manabique Wildlife Refuge.

Expeditions were done during February and March 2021, with a monitoring team integrated by staff from the Toledo Institute for Development and Environment (TIDE), Belize Fisheries Department (BFD) and Fundación para el Ecodesarrollo y la Conservación (FUNDAECO). The sites explored were: Omoa Fisher Anchor, North Bezel, West Bezel and The Jewel. Individuals of Black Grouper and Tiger Grouper were present at the sites, Tiger Groupers were showing spawning coloration, although no spawning aggregation was observed.

2. DECLARATION AND MANAGEMENT OF THE CAYMAN CROWN

Following up on the reform of the Law of Punta de Manabique Wildlife Refuge to include Cayman Crown as core area, FUNDAECO gave a technical presentation to the new members of the Environmental Commission of the Guatemalan Congress. The commission will review the complete file and will provide its opinion.

FUNDAECO set up a roundtable integrated by the maritime authorities and the FUNDAECO team working in Cayman Crown to discuss control and surveillance, management strategies and keep its members updated on the Cayman Crown reef.

1. SUPPORT AND MAINTENANCE OF A COORDINATED MONITORING PROGRAM FOR FSA SENTINEL SITES IN THE MAR

The Belize Fisheries Department (BFD) conducted monitoring surveys during February and March, 2021. No direct spawning was observed, however, groupers and snappers encountered showed signs of spawning behavior. Schools of other fish species were observed such as Bar Jack, Horse eye Jack and Yellowtail Snapper. 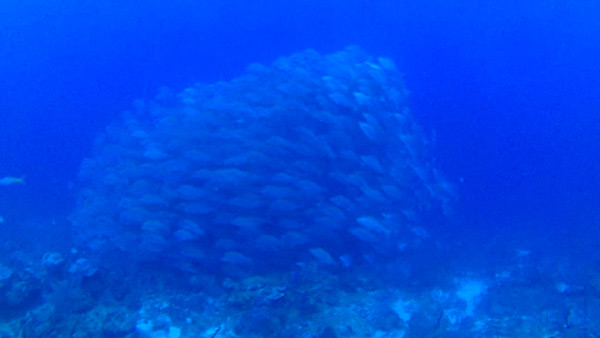 The RRI was created to increase the resilience and ability to recover of the MAR and the environmental and cultural services it provides through capacity building, regulations, economic incentives and financial sustainability required for the effective and timely restoration of the coral reefs.

MAR Fund continues working in the design of the parametric insurance, in collaboration with Willis Towers Watson (WTW), The Nature Conservancy (TNC), the CCAD and other partners in the region. The study “Economic Assessment of Reef Ecosystems in the MAR Region and the Goods and Services they provide” was finalized. The development of emergency response capacities in the MAR continues to move forward with training provided in Belize and the signature of an agreement between MAR Fund and the National Council of Protected Areas in Guatemala. A marine habitat analysis for the region was finalized which describes the extension of coral reef, mangroves and seagrass habitats in the MAR region.

MAR Fund and Willis Tower Watson (WTW) were invited by The Ocean Risk and Resilience Action Alliance (ORRAA) for the project to be featured in a Solutions Series 2021 which is a series of virtual events to share progress on the work of the Alliance and accelerate it.

Furthermore, the study “Economic Assessment of Reef Ecosystems in the MAR Region and the Goods and Services they provide», funded by the Inter-American Development Bank (IDB) was finalized. A Brief is being developed for its distribution among the regional and national authorities of the MAR and the private sector.

MAR Fund and The Nature Conservancy (TNC) are developing and implementing Emergency Response capacities in the four MAR countries. Main advances on these activities include:

A Collaboration Agreement was signed between MAR Fund and the National Council of Protected Areas in Guatemala (CONAP), with the purpose of jointly contributing to the protection and conservation of the coastal and marine resources in the Guatemalan Caribbean. By this, MAR Fund and CONAP will formalize the emergency response capacities in key reef sites of the Caribbean side of Guatemala.

MAR Fund and the RRN, with support from the project MAR2R (CCAD/WWF/GEF), hired a consultancy group to carry out the “Development of instruments for the governance of the Reef Restoration Network of the Mesoamerican Reef System (RRN-MAR).” The objective is to develop, in a participatory manner 1) A Strategic Plan and its respective Action Plan, updated for a period of five years, 2) a Biennial Operating Plan, 3) a Strategic and financial Sustainability plan, 4) a Protocol for the Exchange of Data and Information among the members of the RRN and other partners, and 5) a Code of Ethics.

MAR Fund, with support from the project MAR2R (CCAD/WWF/GEF), is carrying out the Regional Demonstration Project in attention to the SCTLD.  The Regional Dialogue Group of the project held two ordinary meetings to advance on the project’s implementation.

In 2020, two Small Grants were formalized from the 12th Joint Request for Proposals. Despite the emergency of COVID-19, they have made the following progress:

In 2021, two Small Grants were formalized from the 13th Joint Request for Proposals. The projects are:

The objective is to ensure future restoration efforts through the rescue of genetic material and the sexual reproduction of corals. The project aims to increase the number of cryopreserved gametes and include the production of sexual recruits of at least 3 species of the 20 currently affected. These actions are expected to have a greater impact on coral reef restoration and conservation.

The objective is to respond to the outbreak of SCTLD through effective monitoring, treatment and continuous tracking throughout the Lighthouse Reef Atoll (LHRA). Additionally, the project aims to create awareness on SCTLD for targeted users of LHRA (fishermen, tour operators, tour guides and students) to improve their knowledge and understanding of the disease and build capacity of marine conservation partners in SCTLD identification and treatment.

A marine habitat analysis was conducted using updated spatial data to calculate the amount of coral reef, mangrove, and seagrass habitat in each of the four MAR countries, and at the regional level. Also, the amount of habitat within and outside of Marine Protected Areas at the MAR regional and country level scale was estimated. This analysis provides a preliminary example of how to use marine habitat data for potential management purposes.

The projects supported by these programs have been guided by those priority areas of focus established in the BMF’s Strategic Plan and in consultation with the BMF Steering Committee. Some advances include the development of the final draft protocol for undertaking the Integrated Reef Resilience Index; execution of stakeholder mapping and the completion of a perception audit to guide formulation of the branding and marketing strategy for the BBRRS World Heritage Site; development of the draft Business Plan and financial strategy for the Turneffe Atoll Marine Reserve;  and finalization of the consultancy for the development of the Reef Protectors’ Program Manual for guiding implementation of the programs’ outreach.

Contributing to the knowledge, monitoring and protection of mesoamerican reef’s fish spawning aggregations and replenishment zones.

General Objective: Supporting scientific data collection at Cayman Crown, improving the knowledge-base of the ecological baseline of the site, while establishing the legal and technical frameworks for management; and raising awareness of its existence and the importance of management presence.

Branding for change—enhancing national and international awareness of the importance of the BBRRS WHS.

General Objective: Creating and implementing a branding and marketing strategy, inclusive of a communication plan, to sensitize the Belize and international community on the importance of the Belize Barrier Reef Reserve System (BBRRS).

Towards sustainability for the Turneffe Atoll Marine Reserve. 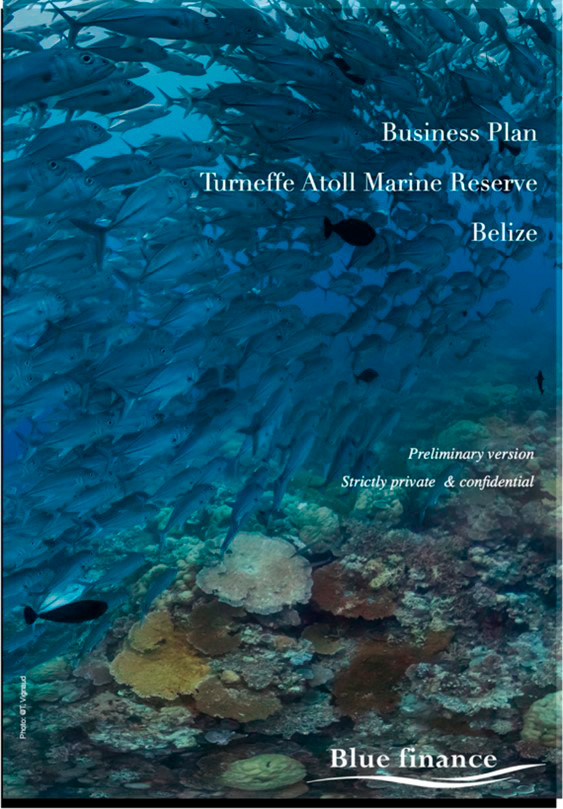 Continued reef replenishment in southern Belize with an emphasis on mapping and quantifying natural and replenish acroporid cover. 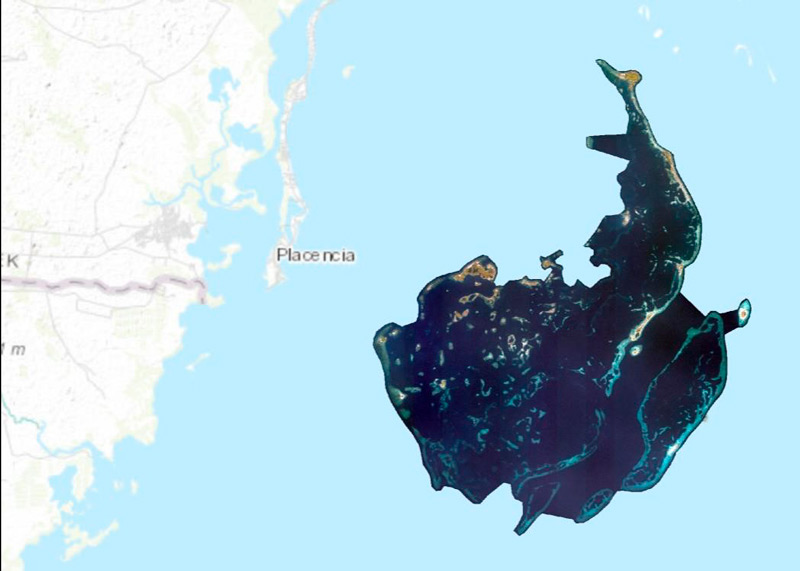 General Objective: : Ensuring the successful establishment and pay-out of a gillnet buyback fund to previously identified licensed gillnet fishers contributing to the government of Belize’s commitment for a gillnet ban by 2022.

General Objective: : Expanding Belize’s protected areas network and improving its management and compliance by increasing support for the finalization of the replenishment zone expansion efforts in Belize. 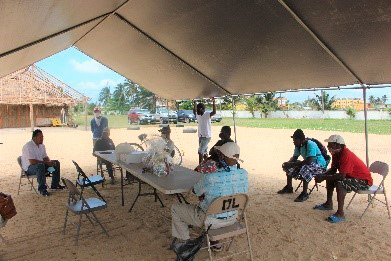 Building capacity of fishing stakeholders for participation in marine conservation, through education, public-awareness and collaboration. 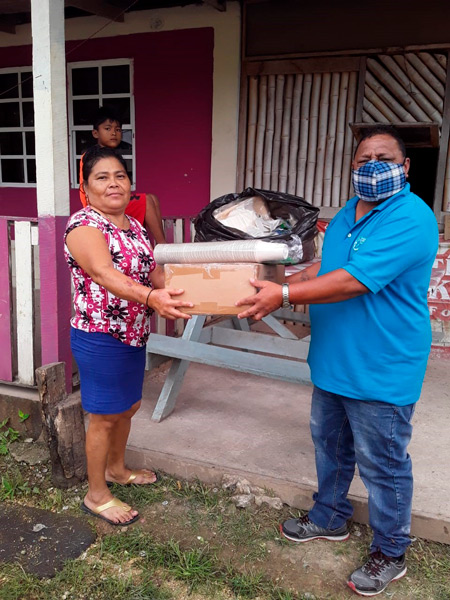 General Objective: Developing and piloting protocols for a successful approach to lionfish control in Turneffe Atoll Marine Reserve (TAMR) that can be replicated across Belize’s MPAs system.

Towards the knowledge, monitoring and protection of MAR Fish Spawning Aggregations and Replenishment Zones.

General Objective: : To help secure the fish stocks of the Mesoamerican Reef (MAR) region through the protection and management of fish replenishment zones located along the MAR. 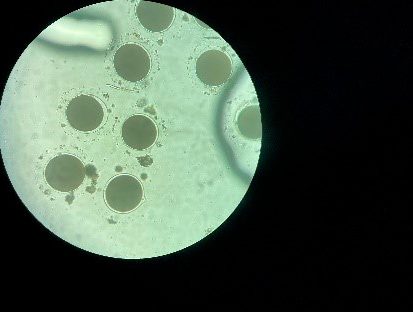 Microscopic image of fertilized eggs at one hour of fertilization. Photo: UB-ERI 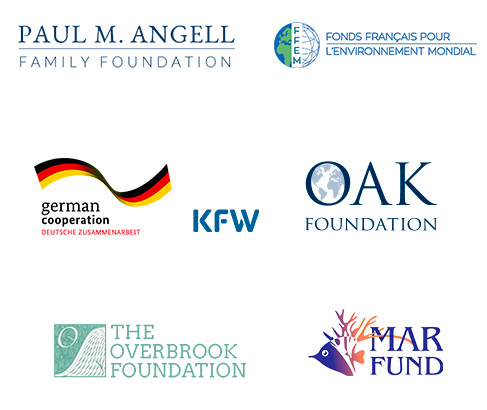 Nine projects were supported under the eleventh request for proposals. All projects have finalized activities. Additional information can be found in the webpage.

The twelfth request for proposals is currently under development. The nine projects show recent progress and are presented below. Additional information can be found in the webpage.

1. PROTECTION AND MANAGEMENT OF CAYMAN CROWN

The jewel of the Mesoamerican Reef – Phase II

3. TRANSFORMING SOLID WASTE POLLUTION WITH THE LEADERSHIP OF YOUNG PEOPLE FROM EL ESTOR 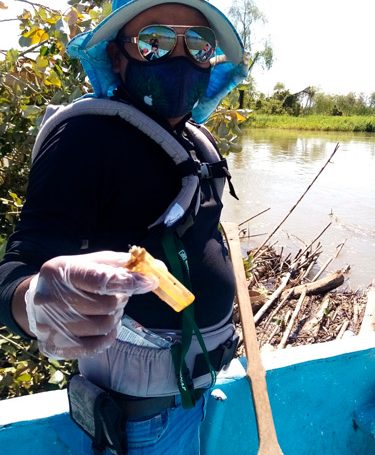 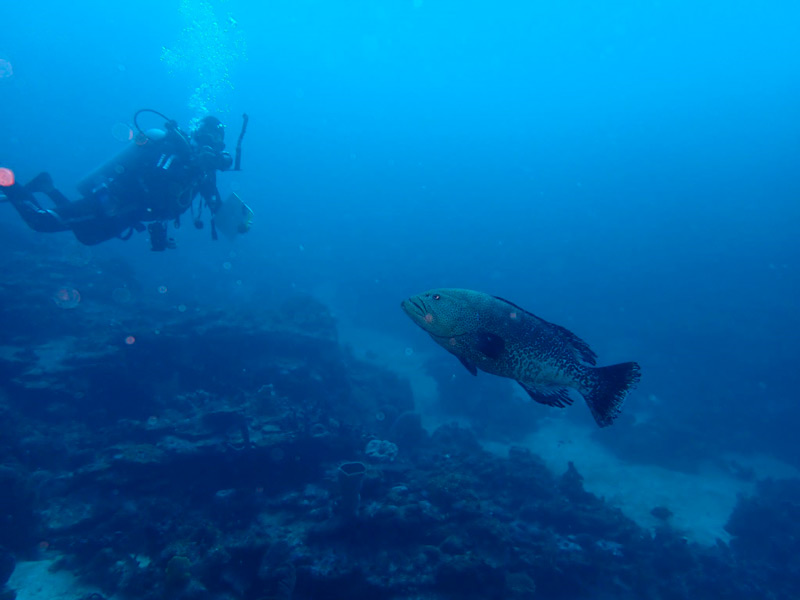 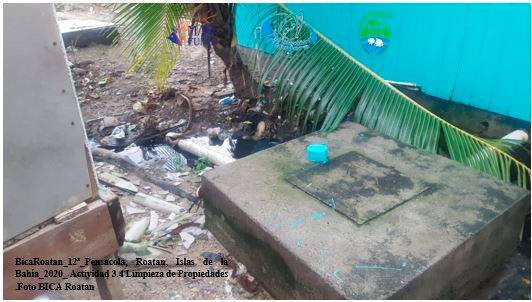 A WINNING COMBINATION IN WEST END 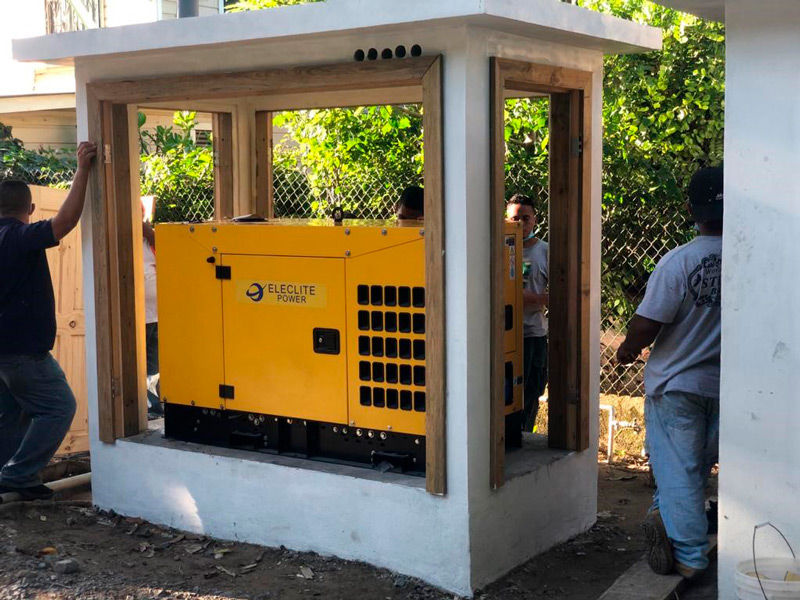 Installation of the lifting station in Avenida Miller. Photo: POLO’s 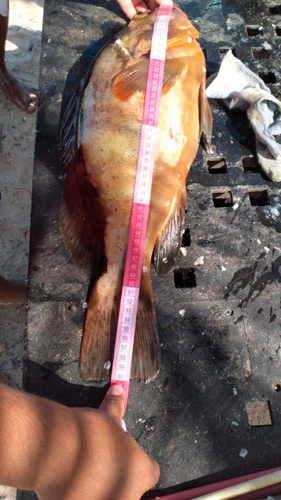 Monitoring of grouper and collection of tissue samples. Photo: COBI

9. STRENGTHENING OF SURVEILLANCE CAPACITIES OF SIX FISHING COOPERATIVES OF THE KANAN KAY ALLIANCE 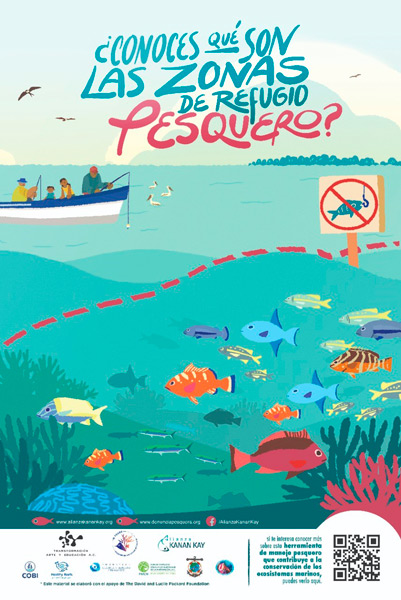 The Grants and Evaluation Committee meeting was virtually held on January 15, 2021 to recommend the proposals to approve. Eight projects were recommended for support, and later on approved by MAR Fund Donors and MAR Fund Board of Directors.

The thirteenth request for proposals is currently under development. The eight projects approved are presented below:

RE-GRANTING IN THE
MESOAMERICAN REEF

Oak Foundation continues to be an important partner and funder in the MAR. To provide further support and strengthen co-managers in the region, Oak Foundation gave MAR Fund a provision of sinking funds to on-going activities for a period of two to four years.

During this period, the last two grantees presented their final reports. Main results as shared below: 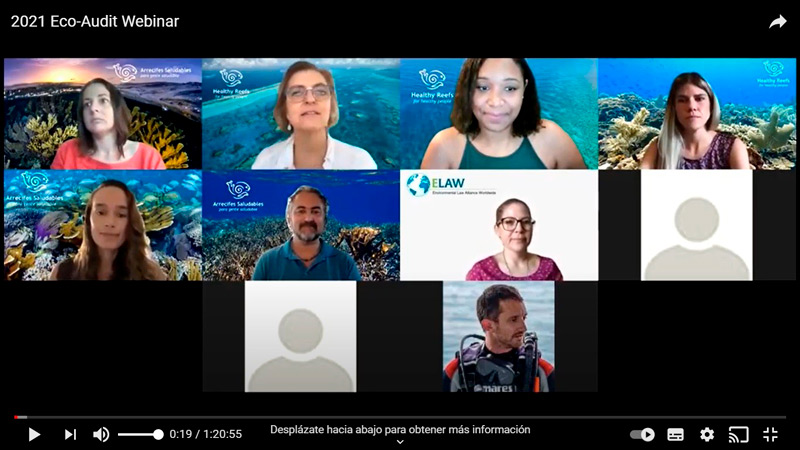 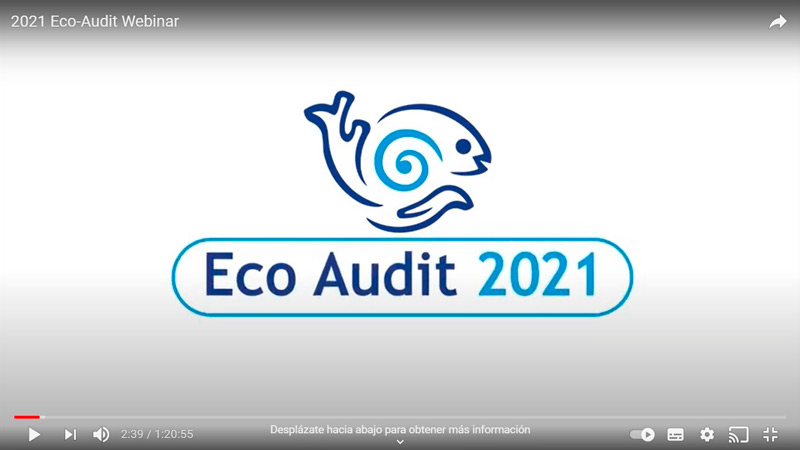 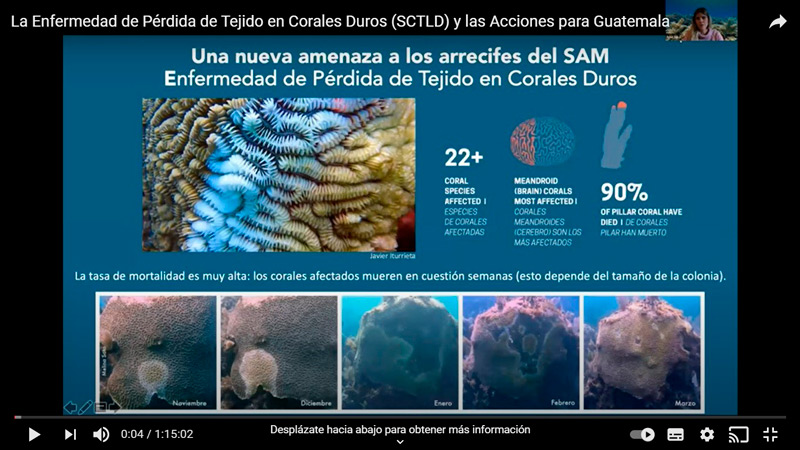 IMPROVING THE FINANCIAL STABILITY OF THE SOUTHERN ENVIRONMENTAL ASSOCIATION 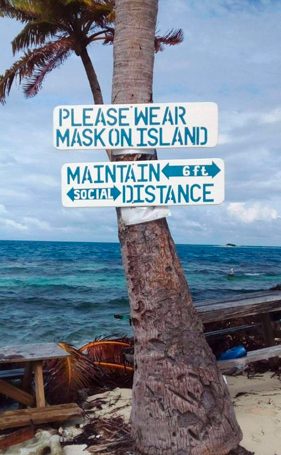 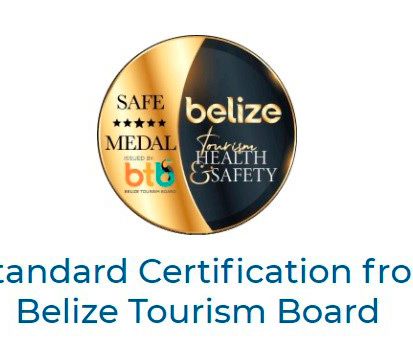 MAR FUND IN THE NEWS

During her participation on this program, supported by Mares Mexicanos and aired every Monday at 6pm (CST), María José talked about the importance of the MAR, its main challenges, and the projects led by MAR Fund in the Mesoamerican Reef region. To watch the first part of the interview and learn about the Mesoamerican Reef and the work to preserve it, click here. To learn about the role MAR Fund has played during its 15 years of trajectory in the MAR, click here. 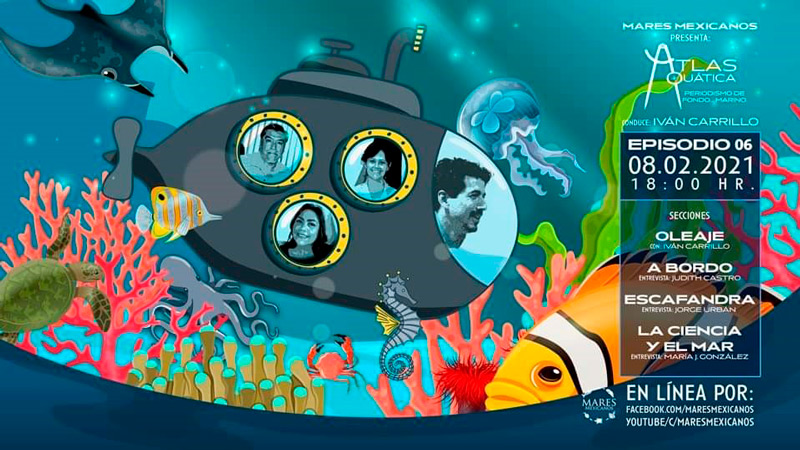